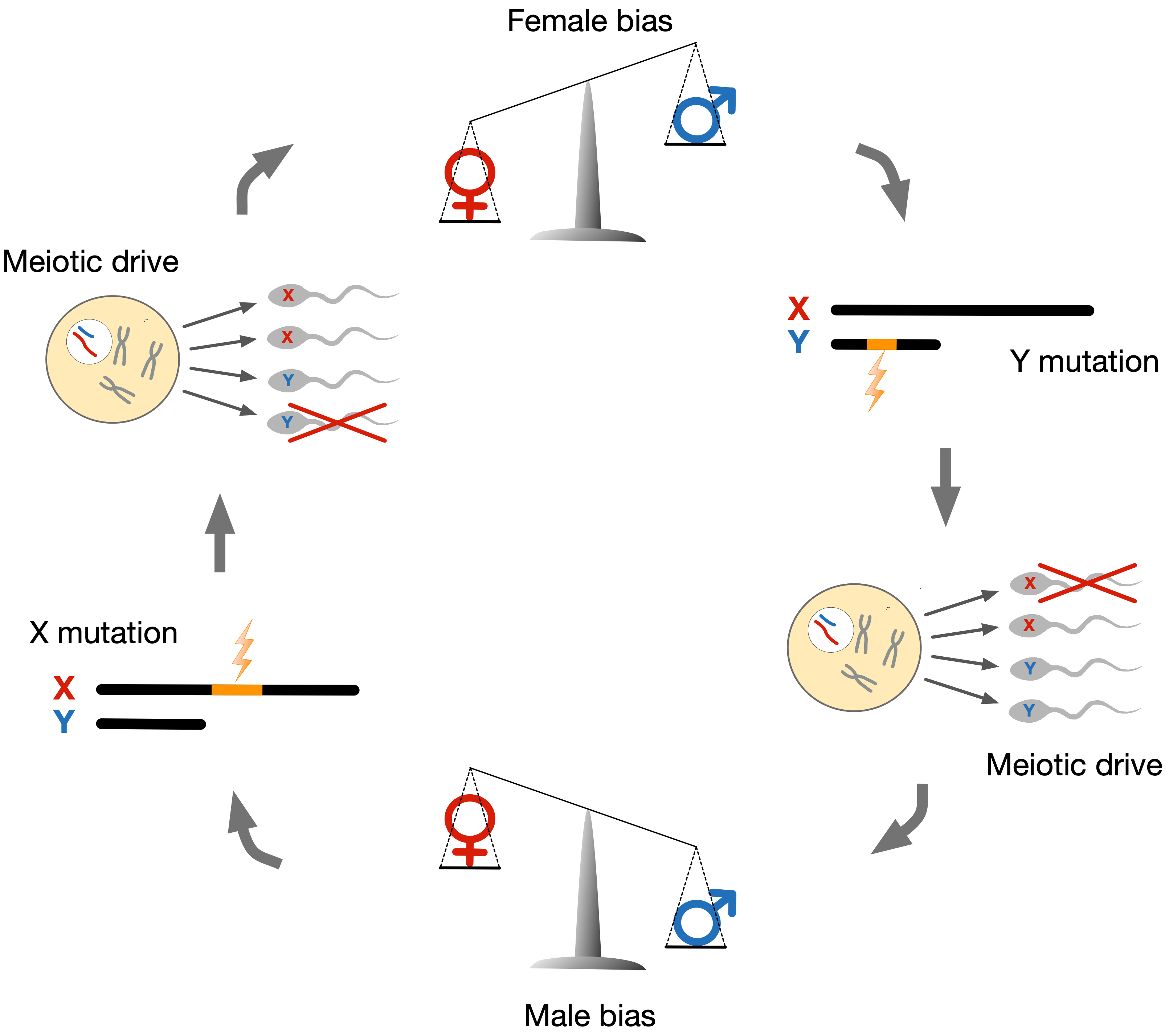 In mammals, the X chromosome is present in two copies in females but only one copy in males. In males, the X chromosome instead pairs with a Y chromosome. Unlike other chromosomes, X and Y chromosomes only recombine at the ends of the chromosomes, which allows the X chromosome to evolve independently of the Y chromosome. Because most of the X and Y chromosomes do not recombine, the fate of genes residing on X or Y chromosomes are completely coupled to either the X or Y chromosome. That means that an X-linked gene may affect its own transmission to the next generation if it can increase the proportion of sperm cells that carry an X chromosome rather than a Y chromosome. Genes may trigger such imbalance either by influencing the symmetry of meiosis or by killing gametes that carry the other sex chromsome. Both phenomena are referred to as "meiotic drive" and enable gene variants to induce their natural selection – even if it reduces the fitness of the organism. This is the insight that initially gave rise to the notion of selfish genes. Natural selection, in the form of meiotic drive, will thus actively promote selfish genes, even when these genes unfavourably distort the sex-ratio of offspring or harm male fertility. Sex chromosome meiotic drive has been observed in several species, and selfish genes has been identified in both fruit files and mice, but so far not in humans. We pursue the hypothesis, that meiotic drive has been a potent force in the evolution of humans and other primates. 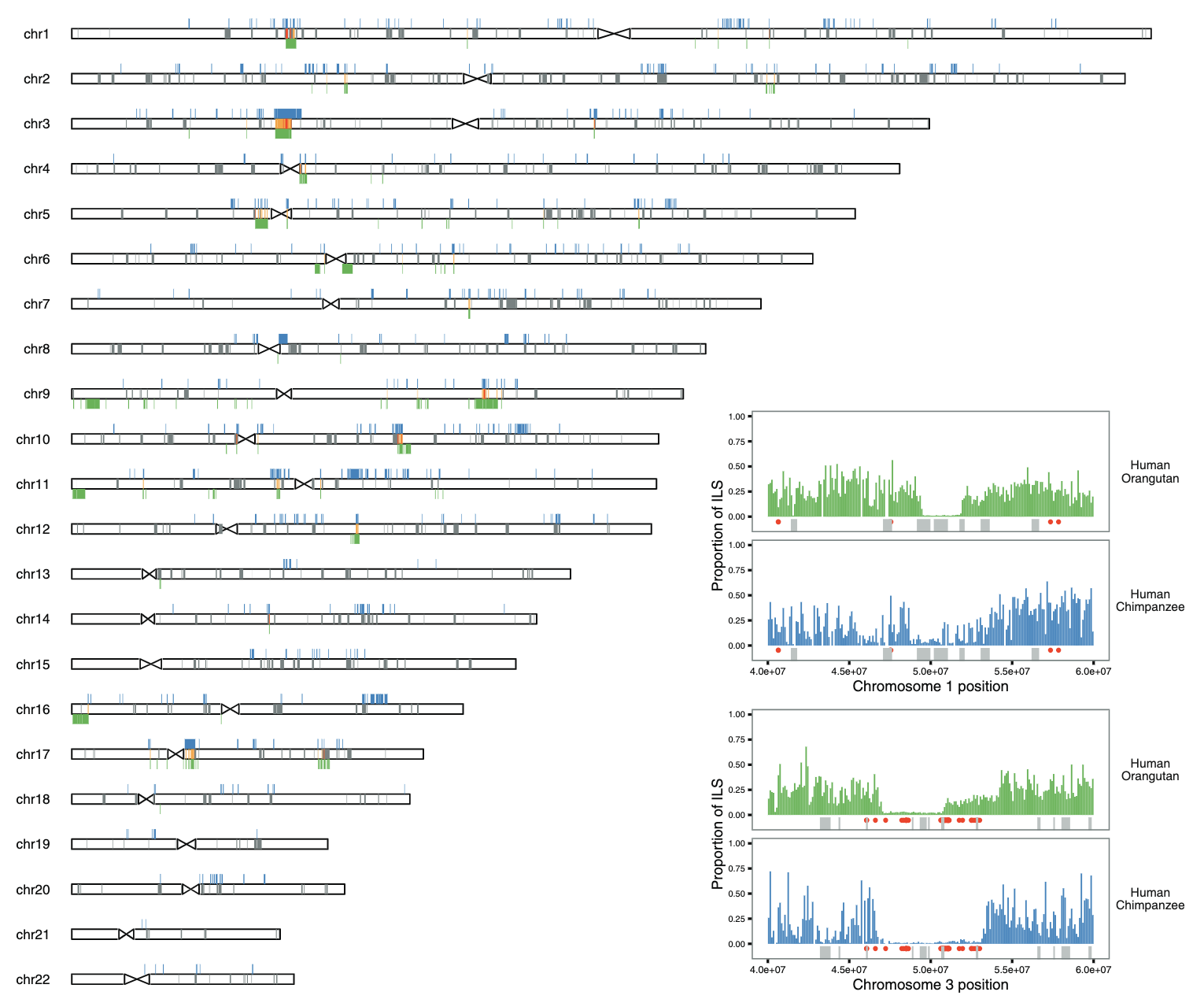 When a strongly selected gene variant displaces all other variants in a population, it also displaces genetic variation in a larger genomic region around the gene. This is called a selective sweep. Recent sweeps can be identified through population genetic analysis of large sets of full genomes. However, this approach cannot identify genomic regions subject to sweeps in the species ancestral to humans and other living primates. To this end we employ methods based on patterns of incomplete lineage sorting, which are able to identify strong selective sweeps or regions subject to recurrent selective sweeps. An intragenomic conflict between the X and Y chromosomes will fuel an arms race between the two sex chromosomes for transmission to the next generation. This will produce succesive bursts selection detectable as sweeps on the X chromosome. We have identified such sweeps across the great ape species tree and we now analyze genetic diversity across the human X chromosome to find evidence of past episodes of strong selection, suggestive of meiotic drive.

The X chromosome and hybrid incompatibility 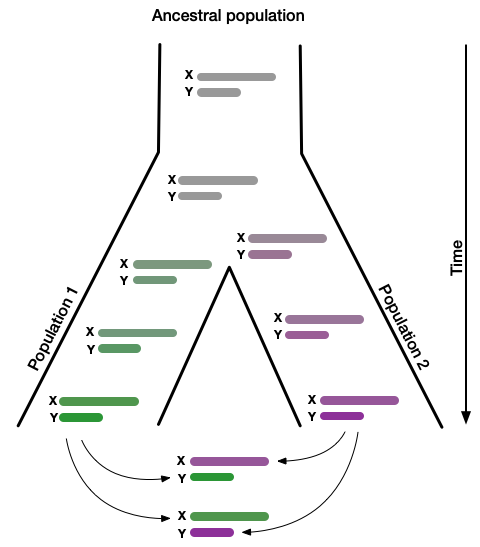 Genetic incompatibilities between incipient species usually first affect the heterogametic sex. E.g. X/Y humans males and Z/W female birds. We, and others, believe that meiotic drive may explain this century old observation dubbed "Haldanes rule". An arms race will cause rapid coevolution of the X and Y chromosome. Over time, this will lead to an accumulation of reproductive incompatibilities between X and Y chromosomes of individuals from separated populations. This process would explain not only the widely observed infertility of hybrid XY males. It would also explain the observation that genes on the X chromosome contribute disproportionately to sterility. In humans, it may explain why regions of the X chromosome have resisted introgression from Neanderthals when these interbred with modern humans ~55,000 years ago. The modern human is the only living subspecies of humans. That means that we cannot efficiently study the proposed relationship between selfish genes candidates and reduced fertility of human hybrids. However, the evolutionary history and relationship among baboon subspecies very much resembles that between modern humans and archaic humans such as the Neanderthal. These evolutionary parallels allow us to investigate if meiotic drivers identified in humans are linked to emerging hybrid incompatibility in baboons.